048: A joke about a future that never arrived

For most of us, Second Life is the punchline to a joke about a future that never arrived, a series of half-built ghost towns long abandoned in favour of new realities much more broken and unescapable (yes, of course we mean Twitter). In The Atlantic, Leslie Jamison heads back inside. Though she sort of ultimately falls victim to the romanticisation she spends half the essay pushing back against, this is still a rare, fascinating peek into a forgotten world which remains vital for its inhabitants, “less like an obsolete relic and more like a distorted mirror reflecting the world many of us live in.”

Intellectually, my respect deepened by the day, when I learned about a Middle Eastern woman who could move through the world of Second Life without a hijab, and when I talked with a legally blind woman whose avatar has a rooftop balcony and who could see the view from it (thanks to screen magnification) more clearly than the world beyond her screen. I heard about a veteran with PTSD who gave biweekly Italian cooking classes in an open-air gazebo, and I visited an online version of Yosemite created by a woman who had joined Second Life in the wake of several severe depressive episodes and hospitalizations. She uses an avatar named Jadyn Firehawk and spends up to 12 hours a day on Second Life, many of them devoted to refining her bespoke wonderland—full of waterfalls, sequoias, and horses named after important people in John Muir’s life—grateful that Second Life doesn’t ask her to inhabit an identity entirely contoured by her illness, unlike internet chat rooms focused on bipolar disorder that are all about being sick.

You can totally judge a book by its cover.

Today’s NY Times Mag is a sprawling themed issue about the future of the car, in which a supergroup of our favourite writers on this stuff – Anna Wiener, Geoff Manaugh, Clive Thompson, John Herrman f’rinstance – come at the topic from a bunch of unlazy and unhyperbolic angles. What will be the iconography of the autonomous road?  How will we regulate a world of 20% autonomous vehicles? And most importantly, what does it all mean for your weed guy? It all reads great online, but if you’re in a place where you can get hold of a physical copy, do so – this is one of those issues where Gail Bichler, Matt Willey and the rest of the design team really show just how satisfying and invigorating great mass-market print design can still be.

And a nice companion to all that – a short history of the Australian road train, the machine-guided innovation that transformed outback life in the 1930s and persists to this day.

Galaxie 500 drummer Damon Krukowski’s Radiotopia podcast Ways of Hearing, billed as an exploration of how digital technology has changed not so much how we listen but how we hear, wasn’t at all what we expected (though the nod to John Berger in the title should have been a hint) – rather than a grouchy love letter to vinyl crackle, it’s a nuanced celebration of mess and of noise, and of the politics and power of imperfection. As Ben Ratliff notes in his review of the companion book The New Analog on the excellent 4Columns, what Krukowski’s really working towards, in the spirit of Jane Jacobs, is a resistance to purely digital understanding of the world we live in now.

Would you like an extensively researched history of PowerPoint? Sure you would.

Alexander Chee on Kevin Spacey in them, a new LGBTQ-focussed online mag which we keep a curious eye on as the first thing to emerge from Condé Nast’s vaguely defined “incubator” for new projects, and the first real title they’ve launched in a decade or so. It’s partly Anna Wintour’s pitch for “Gen Z”, but mostly it’s the trophy project of Phillip Picardi, Teen Vogue’s digital director and anointed future of the company. We hope it shakes free from its oh-so-2017 one-note gradient design and learns what it wants to be soon, as there’s some great stuff in there.

A short, sweet, and solid primer on process metaphysics. Discuss it at a cocktail party near you.

Last week Anna spilled a Nalgene on her laptop in Los Angeles. In turn, Patrick’s laptop instantaneously destroyed itself in a bout of spectral empathy somewhere on the road between Toronto and Montreal. If we’ve somehow made water damage viral and this email destroys your reading device of choice… umm… sorry?

We suppose you could always forward this link to friends who’ve been meaning to get around to upgrading their laptops. You’re welcome! 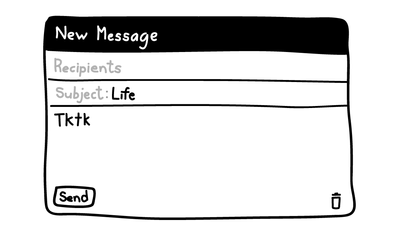