We’re as heartbroken as everybody else about the death of Anthony Bourdain on Friday. But you don’t need our thoughts on how he showed others how to be in the world and how to be in the world, not just to eat in it, or how he transcended the toxic culture he enabled as a younger man, devoting his life to pushing back against it. If you’re confused as to what set Bourdain apart, if to you he was just a loudmouthed CNN food show host, we suggest Helen Rosner’s tribute in The New Yorker as about the best place to start. And then you can join us streaming old Parts Unknown episodes all week long. Bourdain’s fame wasn’t the distant, lacquered type of an actor or a musician, bundled and sold with a life-style newsletter. Bourdain felt like your brother, your rad uncle, your impossibly cool dad—your realest, smartest friend, who wandered outside after beers at the local one night and ended up in front of some TV cameras and decided to stay there…The last time I saw Bourdain was a few months ago, at a party in New York, for one of the books released by his imprint at the publishing house Ecco—of his many projects, his late-career role as a media rainmaker was one he assumed with an almost boyish delight. At the bar, where I’d just picked up my drink, he came up and clapped me on the shoulder. “Remember when you asked me if I was a feminist, and I was afraid to say yes?” he said, in that growling, companionable voice. “Write this down: I’m a fuckin’ feminist.”

ThingsMeet Norman, an AI smart enough to write not-altogether-inaccurate captions for images. What’s funny about Norman, though, is that the MIT researchers that trained him used only the most gruesome and repugnant images dredged up from an unspeakably dark subreddit. The result? An intelligence so biased (in this case towards the macabre) that you begin to wonder what kinds of conclusions are reached and decisions are justified when laundered through the “objectifying” sieve of data.
“My guy versus the Man.” Friend of BS Chris Frey, writing in The Guardian on the eve of pot legalisation in Canada, asks a couple of Toronto dealers what they think about the government muscling in on their turf. We’ll report back next month (or when we get round to it) as to how prescient the dealers turned out to be. In California Sunday, Rollo Romig reports on how Infosys, the company that reshaped the modern Indian economy and turned Bangalore into a global epicentre of offshore IT, is wobbling, punch drunk, in Trumpian times. The latest episode of Benjamen Walker’s Theory of Everything—the fifth in an engrossing series on fakery in its many forms—segues from an investigation of modernist furniture knockoffs, and the dollar value of classic design, to a lament for what the modern podcast industry has become, featuring a surprise cameo from Starlee Kine of the great, and gone, Mystery Show. For Kine and Walker, podcasting gave it all up as soon as advertising came knocking, not bothering to explore what alternative business and creative forms might have looked like. Now everything sounds the same, the post-Ira Glass format still rules, and can I tell you about this really comfortable mattress? Meanwhile, over at Surface, Angela Serratore also takes a look at the knockoff industry, arguing that in the tangled web of copyright complexity that surrounds modern product design, the solution to fighting counterfeits might be not so much litigation as, well, actually thinking about inclusivity. Your soundtrack for the week: Angelique Kidjo’s loving reclamation of The Talking Heads’ Remain in Light, an inversion of the usual narratives of cultural appropriation, taking the album that brought Fela and West African polyrythms to the cocktail parties of the west, and treating it as though it was born in Benin. I went to a party with some friends of mine and somebody started playing the song of the Talking Heads called "Once in a Lifetime" and everybody was standing and dancing weird, and me, I was grooving. And I told them, "This is African music," and they go, "Hell no, this is rock and roll. You Africans are not sophisticated enough to do this kind of music.” No links here, just a moment to recognize that another cynical populist has been voted into power—gaining majority rule here in Ontario. But we're just as disappointed with the uninspired #resistance mounted by opposing parties, who seem to be holding onto the hope that righteousness and indignation will somehow pave a path to power. Their policy platform is certainly more complete and robust, but will only ever be used for self flagellation if not complemented with an effective strategy for communications and engagement.
Such lessons are being learned in the global realm, as the liberal western order may be slowly waking up to acknowledge “alternate” worldviews and their corresponding centres of power. This acknowledgement isn't endorsement, but an early and necessary step toward realistic strategies of constructive enagagement. Political industry has become so sure and busy with managing appearances that the real material of the matter is overlooked and ceded to the control of the other.

Meanwhile, over at Quartz, Jeffrey Smith and Alex Gladstein argue that a focus on the Sustainable Development Goals at confabs like the G7 actively undermines real progress in democracy, by design and not by accident.

"The Rich Are Planning to Leave This Wretched Planet."
At The Paris Review, a heartfelt ode to the dinkus. 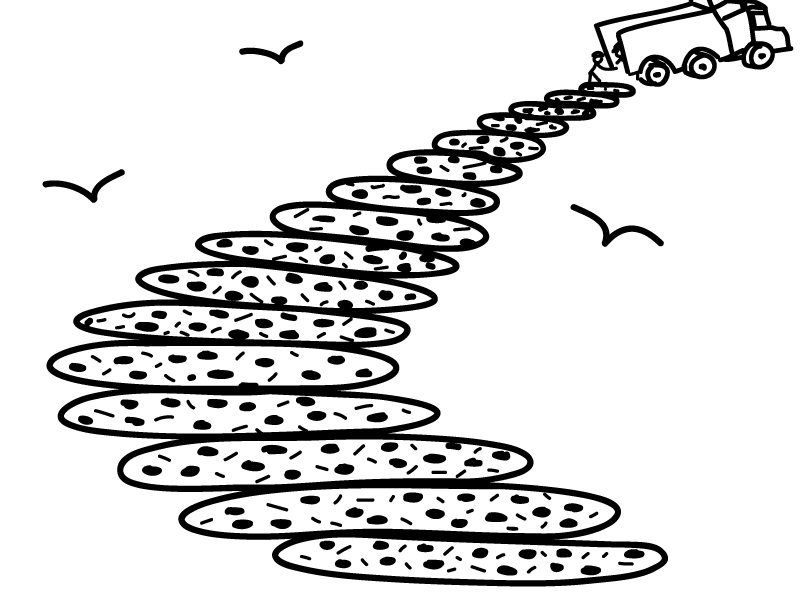