Just some glorious visual moodsetters for you this week. In Calvert Journal, Owen Hatherley and photographer Christopher Herwig survey opulent underground stations from all across the former Soviet Union. Meanwhile, from today’s NYT Mag, the rapturous team-up of Helen McDonald and Paolo Pellegrin bring us sea eagles in hungry flight in the Norwegian fjords. Get that one in print if you’re able where you are—those photos deserve it.

Those of you as obsessed with the “Havana Syndrome” saga as we are — from murmurs of sonic warfare to the expulsion of Cuban diplomats from the US — will be pleased to learn about the latest twist: it turns out the cause of concussion-like symptoms among US and Canadian diplomats was likely to have been… aggressive mosquito fumigation? (It’s always the insecticides in the end, isn’t it?) But there’s an important caveat, and regular readers know this old refrain of ours well: the paper on which the latest round of media hubbub is based has yet to be published in a peer-reviewed journal, meaning it’s not kosher science just yet. (We know this because Buckslipper Eli Burnstein was lucky enough to be the paper’s pre-submission editor, so stay tuned for when that comes out.)

Did Eli use Cormac McCarthy’s tips for editing science papers, revealed in Nature this week? (Should he have?) We like this one:"Don’t worry too much about readers who want to find a way to argue about every tangential point and list all possible qualifications for every statement. Just enjoy writing."

Do you like/dread that bit of this newsletter every week where we try to find something new and meaningful to say about climate change? Or at least point you to those who are? You know who’s doing that a lot better than us? Emily Atkin’s new most-days email Heated is entirely devoted to reporting the climate crisis from a place that’s assertive and aggressive where it needs to be, but not from a point of despair. It’s worth it, trust us.

In her latest edition, Atkins points to a really interesting report that came out in parallel with the IPCC’s new, and bleak as ever, report on the health of the oceans. This intergovernmental report, though, is very specifically about the massive contribution that improving ocean health could make to overall reduction of emissions, and the five big actions we’d need to take to make that happen. Look, hope! There! Have some! March with it!

We’re not entirely sure this excellent, lively Wired feature by Brendan Koerner on the adaptation and actual evolution of urban wildlife needed its climate change hook or strange reach for savage optimism in its kicker, but it goes deep on how creatures, and nature, adapt to what we throw at them.

When I asked Munshi-South why urban evolution is suddenly hot, I expected him to cite the proliferation of accessible DNA-sequencing technologies—an obvious boon to smaller, more unconventional labs like his that struggle for funding. But his primary explanation was more of a downer: He sees a kind of resignation to a dark environmental future, especially among younger biologists who have no memory of more idealistic days and who see little point in examining any instances of evolution that aren't driven primarily by human activity. “I don't want to call it capitulation,” he says, “but it's kind of reconciling with our changed world.”

Mimi Zeiger’s Dezeen review of the third Chicago Architecture Biennial, against the backdrop of the climate strike and other crushing concerns, has a little bit to chew on about the role architecture, and design more broadly, has to play in either mitigating or being complicit in  contemporary crises:

“This biennial is teaming with anthropogenic urgencies: violence caused by structural racism, global housing inequities, and scars left by colonisation and resource extraction. While exhibitions and biennales over the last decade have tackled these subjects, often showcasing the architects and designers as hopeful agents of change and architecture as a solution to a wide range of social ills … one comes away from ...and other such stories with a deepened sense of architecture's complicity, rather than it's saviour complex.

We lovingly razzed Michael Chabon for the earnest speechmaking in the excellent Unbelievable last week, so by way of atonement, here he is at his earnest best on the role art has to play in a moment of despair. Nothing new here, unashamedly hokey even, but always worth hearing it said well.

“And what is that truth, the truth of art, that freeing blade, that slaking drink in the desert of the world? It’s this: You are not alone. I am not I; you are not you. We are we. Art bridges the lonely islands. It’s the string that hums from my tin can, over here looking out of my little window, to you over there, looking out of yours. All the world’s power over us lies in its ability to persuade us that we are powerless to understand each other, to feel and see and love each other, and that therefore it is pointless for us to try. Art knows better, which is why the world tries so hard to make art impossible, to immiserate artists, to ban their work, silence their voices, and why it’s so important for all of us to, quite simply, make art possible.”

Vox Media has acquired New York magazine and its orbiting blogs (including Vulture). Joshua Benton in NiemanLab captures the gist of why this feels right: “the most print-like digital publisher is joining up with the most digital of print publishers.” Colin Morrison charts New York’s broader history from its Milton Glaser origins, through the NewsCorp machine, into its digital repositioning under the Wassterstein Family Trust, and extrapolating into Vox’s global expansion.

With that, it seems content has finally figured itself out. Not so fast—we’re just over a month away from the streaming wars+ with the launch of Disney+ and AppleTV+ getting out before the 2020 launch of HBO Max and Peacock (something about that not-NBC+ name works for us... it’s a word familiar yet uncommon enough that its primary meaning is vulnerable to being completey redefined in our brand-first brains). Peacock. Plus (+) network names mean less than ever with all the property reshuffling—The Big Bang Theory is going to HBO Max,  The Office to Netflix, and it’ll take time time to get used to thinking of Disney+ as the home for The Simpsons, Star Wars, and National Geographic.

In The Guardian, Tess McClure goes long on the harsh realities and right violations that lay behind the rose-quartz-tinted curtains of the billion dollar healing crystal industry.

What is Buckslip and what should you do about it? 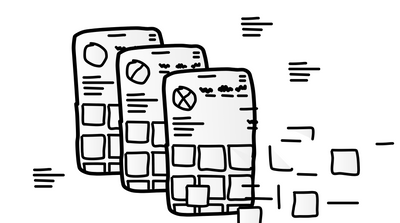