Alabama goddamn. Where “stand your ground” laws don’t count for nothing if you’re a woman:

They wore you out, those American nuclear warriors. I have a particularly unpleasant memory – and maybe so had Palme – of the US government’s twenty-something defence analysts who lived on rock music and Coca-Cola while they calculated to the last half-million or so how many of us would be turned to ash in a first strike…. It was their air of superiority that got to me, the “we know better than you do about how you’re going to die”. I just couldn’t warm to them.

John Le Carré, upon being awarded the Olof Palme Prize, delivers one of our favourite all-time acceptance speeches, which aside from some entertaining Cold War reminiscing and broadsides against Brexit, poignantly illustrates how Palme embodied exactly the sort of moral courage the world could use right now.

In The California Sunday, a beautiful little photo essay from Xyza Cruz Bacani and Joy Shan on “balikbayan boxes,” the care packages sent home to families by Filipino domestic workers in Hong Kong.

The GPT-2 algorithm generated a lot of media buzz last year for its startlingly realistic neural network–generated text. But so often when we talk about AI, we mistake qualities of prediction for qualities of understanding, as Gary Marcus argues in an in-depth piece at The Gradient.

The Economics of 24/7 Lo-Fi Hip-Hop YouTube Livestreams. (Does that count as our BoJack reference for the issue? Or should we sneak in some more?)

A phenomenal archival photography dig from the NYT for the sixtieth anniversary of “The Year of Africa,” 1960, when seventeen African countries declared independence. We’re a bit sad the print version is only on newsprint, as we’re going to want to keep it for a long time. What’s captured in these photos, and the accompanying texts by a wonderful array of contributors of African descent, is probably best summed up straightforwardly by the great footballer Didier Drogba, in his entry: “What I’m proud of when I see these pictures is that they’re very different from the pictures people are used to seeing of Africa. Poor Africa. Dying Africa. The pictures we have here — this is the real Africa. You see people with style. People here enjoy life, and they are looking for freedom as well.”

For The Craftsmanship Initiative, Alden Wicker travels far along the global textile supply chain, surveying various attempts at developing a sustainable cotton alternative, through recycling, synthetics, or organic approaches to production. At the end of the chain, regardless of which direction you follow it, there are as many real costs, human and otherwise, as there are promises for a better way.

In a great feature for The New Republic, Aaron Timms retreats to The Hotel Belvédère du Rayon Vert to volunteer at a summer school dedicated to the degrowth movement, a very particular and particularly divisive ideology of adaptation to climate change.

Here in Toronto, a particular generation of urbanist and/or activist tends to mythologize that time in the early 1970s when Jane Jacobs and her cohort stopped the development of an expressway (or the “world’s most supercolossal car-sophagus” as Marshall McLuhan called it at the time in his trademark understated way) that would have plunged an asphalt dagger through the city’s heart. But the thing is they didn’t really stop it. They just got it halted before it made it to where those with the most clout lived, leaving a strangely useless stub of a road that nonetheless caused profound damage to parts of the city they didn’t really need to care about. In The Local, Shawn Micallef tells the story of Lawrence Heights, where a community largely comprised of public housing projects remains cleaved by the stub of that expressway to this day.

Our preferred source of sensible updates on the Wuhan coronavirus seems to be this ongoing tweet thread from Ferris Jabr. In particular, this piece from STAT (whose coverage has broadly been excellent and trustworthy) clearly outlines two likely outcomes of all of genuine failure of containment. Neither of which are terrifying!

Hot singles near you! FREE one-hour delivery with Prime. File under: parodies that probably won’t be, about five minutes from now. But speaking of Amazon, we’re intrigued by Bookshop.org, a new online ordering effort which attempts to funnel a decent portion of its profit back into neighbourhood indie bookstores. It clearly comes from a place of love and good intent—is that enough to get people to actually buy? Or is it too late for such an effort now? We’ll watch with a tiny smattering of hope.

More ThingsA highly entertaining Schoolhouse Rock-ish version of Ukrainian history is not without its problems—and of course it has everything to do with how the country sees itself against Russia.

We might never get another season of the incomparable Brit Marling in The O.A. (rest in peace, Old Knight), but we’ll take what we can get. In “I Don’t Want to Be the Strong Female Lead,” in the Times op-ed pages today, Marling does what she does best—leveraging mainstream platforms to go confrontationally weird and deep, on female bodies, the violence done to them in our entertainment, and a certain kind of storytelling as a certain kind of resistance:

Even in the silence I dream of answers. I imagine new structures and mythologies born from the choreography of female bodies, non-gendered bodies, bodies of color, disabled bodies. I imagine excavating my own desires, wants and needs, which I have buried so deeply to meet the desires, wants and needs of men around me that I’m not yet sure how my own desire would power the protagonist of a narrative. These are not yet solutions. But they are places to dig. Excavating, teaching and celebrating the feminine through stories is, inside our climate emergency, a matter of human survival. The moment we start imagining a new world and sharing it with one another through story is the moment that new world may actually come.

“Throughout our work, we’ve seen how hard it can be to build such a life in the music industry—from how difficult it is for aspiring musicians to break through, to how even the most seasoned, respected musicians struggle to support themselves. But what, exactly, is bringing down the music industry—and what can be done to improve things?” A study from The Creative Independent, somehow still finding entirely new ways to be excellent, on how a music industry should be.

“We are seeing marketing folks enter the space, eager to sell their clients on podcasts, but thin on ability to deliver promises — due to inexperience paired with the gamble of publishing any media. Companies are told podcasts provide intimacy, conversion, it’s all a shell game.” A thread from Katie Jensen on the very poppable podcast bubble.

From DigiDay, quantifiable proof of something we’ve been arguing with media people about for years. Mainstream publishers are finding—who knew!—that publishing less stuff, but making it better, and more tangibly tracking the real, slower-burn journeys from meaningful engagement to subscription, is way more effective than flooding the internet with as much junk as possible, just because you can.

Ok, one more BoJack, with some Good Place for good measure—James Poniewozik on TV’s “two great moral comedies” that ended last week. Don’t read if you haven’t finished both, but if you have, talk to us? We have so much we want to talk about.

MIDI 2.0! Only 37 years after version 1.0! In this Quartz explainer by Dan Kopf, what’s most fascinating to consider is not so much the possibilities of the new, much-more-modern technology, but how much of what we’ve come to take for granted of the sound of the last four decades—so much that is beautiful, so much that is wild—has been shaped for better and worse by the rigid limitations of an old, old protocol. Get ready for those ultra-high-def pitch bends, kids, they’re coming.

An inbox of one's own.
Long live email.


129: The Macramé of Resistance 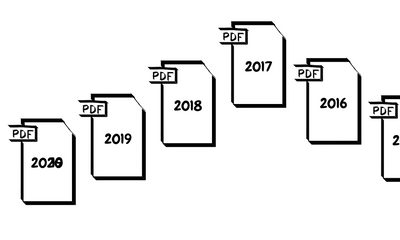