135: The opposite of distancing

“Sometimes it’s enough to just name the world, to call out its parts. I can remember sex before quarantine: the opposite of distancing, the opposite of illness, the opposite of restraint. I can remember the overflowing carts at the grocery store during the days when rumors of lockdown were still rumors: the woman hoarding cat food and instant coffee, the man whose arms were loaded with soap, as if he would do nothing but clean himself until the end of time.”
– Leslie Jamison, Since I became symptomatic

How are you doing? It’s the first question we always ask in any conversation, right? But somewhere in the last few weeks, we’ve started to want an honest answer. Even in business meetings, behind our cams, we all seem to start there, with the genuinely offered enquiry. Without human touch, the least we crave from those on the other side of our screens is honesty.

Nobody is doing well. Nobody should be doing well. Not even the guy at my corner convenience store selling off-brand hand sanitizer for 20 dollars a bottle. He’s scared and desperate too, I tell myself while suppressing the desire to shout at him. Shouldn’t shout without a mask on. April 1 is coming, and nobody knows how they’re going to pay rent. We’re hoping the government will say something tomorrow. Something that will make it better. I hear people who work in the kind of jobs that aren’t my job (and who still have jobs) describe how workplaces are split between those who soldier on with their pre-existing missions, finding purpose in whatever mundane task they already had, and those instead recognising that capitalism’s been unplugged at the wall socket for the time being, turning whatever collective energy they can muster to the question of “how can we help? what is something useful we can do for others right now, since we’re here and all?” I’d be curious to hear how those conversations are going down in your own working lives, if you’re among the lucky ones who still have such things.

Last time we sent this out, I asked you to check in. I got kind and honest notes back from you in your various solitudes around the world. It was nice to know you’re getting by, even if not always easily. Keep letting us know, yeah?

For a while now, I’ve been seeing a counsellor to figure out how to deal with multiple layers of grief that circumstance has bestowed in recent years — some of it anticipatory, some of it deeply buried. In our video chat last week, we talked about what it is to not catastrophise in the midst of a genuine, actual catastrophe. Anticipatory grief is extraordinarily difficult to come to terms with. It’s not something that you get instead of grief, when you know death is coming, like some sort of credit payment on mourning — it’s just an extra special awful thing you deal with beforehand, that doesn’t make the thing itself any easier. And right now, that sort of grief is something we’re all feeling. The things we train ourselves not to do, the tricks we have to not do them, they don’t work so well in these circumstances. I appreciated this generous and clear HBR interview with David Kessler, who co-wrote the book on this. A reminder that coping is in the small things. Meaning needn’t be grand to be meaning:

“I’ve been honored that Elisabeth Kübler-Ross’s family has given me permission to add a sixth stage to grief: Meaning. I had talked to Elisabeth quite a bit about what came after acceptance. I did not want to stop at acceptance when I experienced some personal grief. I wanted meaning in those darkest hours. And I do believe we find light in those times. Even now people are realizing they can connect through technology. They are not as remote as they thought. They are realizing they can use their phones for long conversations. They’re appreciating walks. I believe we will continue to find meaning now and when this is over.”

Maybe the video chat burnout is coming, but it’s been nice to spend time with people. Even in the big Zoom sessions that aren’t about the looming things at all, just open sharing on stuff we love. Even the ones that get zoombombed by bored kids who just want to draw cocks on everything. If I’m feeling generous I’ll call them the spiritual heirs to the bored phone phreaks of the 1980s, surfing around looking for conference calls to colonise. They’ll settle down, maybe. Or maybe drawing cocks on things actually never gets boring? I guess that’s another thing we’re going to find out.

People are collating good calendars of virtual events (the word “virtual” now officially being redundant) and we’re seeing publications pivot to comforting, isolation-driven formats (though if you follow this evolving Google doc of which publications are shutting down their freelance budget, you’ll get an eye-opening real-time view of the latest media implosion). But the most useful parts of these last two weeks have been the ones where I’ve just let myself stare into space. Not in any mindful way. Not in any appreciative way. Not in any productive way. Just to do the most useful thing I can do in this, which is nothing at all. That’s a hell of a privilege, to be able to do that in solitary comfort right now. For those of you who don’t have such comfort, for whatever reason, well… I hope that you’re doing ok. Or at least that you’ve found a way to draw some cocks on some things and make it a little better. Meaning needn’t be grand.

Panic at the Dem! The last thing anybody needs to hear at the moment is predictions that are certain. Much of our work at the moment, coincidentally or not, seems to be with various people who fall within the realm of prediction, trend forecasting, futurism and the like. Thankfully, by self selection, it’s with people who are good people in this space. Not the snake oil people. People who know the best thing a trend predictor who’s not a scientist could contribute right now is nothing at all. An easy filter to mitigate your doomscrolling at the moment would be to simply choose not to read anything with a headline that claims to explain any of this with certainty. Weirdly, Slavoj Žižek was amongst the most useful and least certain? Somehow we doubt his already-forthcoming book (there’s already a cover design!?) will be as well-considered as this short piece — at least we know he considers himself an essential service that must not be shut down. We’re tempted to start a google doc tracking every modern philosopher and thinker we read at university, the good ones and the bad ones, and graphing how long it took them to get to their coronatake. (F’rinstance, here’s Judith Butler showing up on time and saying precisely everything you’d expect her to say.)

We appreciated this great analysis by Jesse Hirsh in his Metaviews newsletter comparing and contrasting the well-meaning but still ego- and ideology-driven bluster of Yuval Noah Harari’s “The world after coronavirus” in FT with Ed Yong’s “How the Pandemic Will End” in The Atlantic. Yong’s, of course, is the one you should read: “We should be wary of people claiming to know our future. Further we must recognize that the future is inherently a political construct, the result of political economic forces, that we ought to be part of. Therefore it is always a good (political) exercise to imagine a future that you desire. What future do you want? What future does your community want? What would it take for such a future to manifest? What can we do to make that future our own?”

Get beyond the “Here’s How” certainty in the headline of this Politico collation of speculations of that near-future world, and you’ll find some good and thoughtful contributions from thinkers who are willing to say “perhaps”, “maybe”, and “could”. And for the most part when they’re certain, as Astra Taylor is, it’s a certainty as to what’s been revealed, not what’s coming: “It’s clear that in a crisis, the rules don’t apply—which makes you wonder why they are rules in the first place. This is an unprecedented opportunity to not just hit the pause button and temporarily ease the pain, but to permanently change the rules so that untold millions of people aren’t so vulnerable to begin with.”

Oh look, ok, you can at least read David Byrne telling us it’s going to be fine. We’ll allow that. And FYI, Stop Making Sense is on the Criterion Channel – if you have it, it’s pretty great comfort food, even the thousandth time over. Even the dancing is relatively responsible, social-distancing wise.

Emily Nussbaum on Fiona Apple is about the only longform thing that’s not about the pandemic we’ve been able to finish. Y’know, a new Fiona Apple album would be really useful right about now.

With Dr. Donald Trump prescribing quinine to Americans, Quartz offers this timely facepalm of a deep dive into the Dunning-Kruger effect, the cognitive bias of “illusory superiority” through which we have a tendency to grossly overestimate our competency and knowledge, especially in areas we possess no particular prowess in. “Before you roll your eyes and protest that of course stupid people are too stupid to realize it, let this sink in: While Dunning and Kruger did find a link between obnoxious overconfidence and ignorance, the effect is universal. We all have blind spots of unearned confidence, and it can be an important (if embarrassing) part of the learning process.”

Just the other day we were wondering, what is there left for gamblers to bet on, what with all major sports leagues and events now suspended? (Though, for a while there we did find the Belorussian football league still in action.) Now we know: “Desperate Casinos Are Now Taking Bets on the Weather”

But where does that leave sports commentators without sport to comment upon? British broadcaster Nick Heath has turned to daily life for the subject of his play-by-plays, with happy-making results for everyone. “It’s proved to be the zenith of my career,” Heath explains to Slate. It’s tempting to believe Heath was inspired by the French writer and Oulipo mainstay Georges Perec, and his exercises in the infra-ordinary — written texts that document “what happens when nothing happens” at a particular place at time, their only literary function to catalogue the everyday mundane — but Heath gets much too excitable for that.

Of course, with each passing day, life under self-quarantine risks becoming the new mundane: Lynne Tillman on the small act of leaving the house.

Following this running series of dispatches in the New York Review of Books from their writers around the world, not just in Brooklyn, you see a shared sense of the realisation of the arrival of the thing itself, and the way we live it. The mundane and the urgent, entangled.

Stay safe, yeah? And let us know how we can help.

We’re probably going to keep cutting these back to every two weeks for the time being, because you have enough in your inbox and we’re all just coping, but, like, honestly, just email if you want to chat. We have a mostly empty Zoom room that’s almost entirely graffiti-free! Come mess it up for us.

And these work for sharing, like magic from a more innocent time: 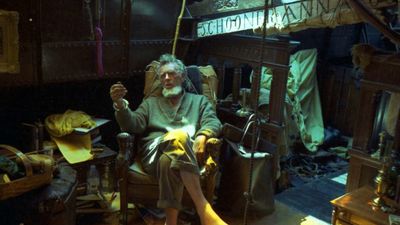